HTTPs stands for Hypertext Transfer Protocol Secure, it is an encryption-based technology; it makes the exchange of information between a browser and user security. It works in such a way that no third party will be able to intercept what data is being exchanged. So a when a visitor enters email address & password to log in to an HTTPs-encrypted website, this data will be entirely safe. It is precisely for this cause that bank websites and social networking sites employ the use of HTTPs (also called SSL), to prevent the leaking of enormously sensitive information such as credit card number, to fall in the wrong hands.

Internet security is of supreme significance as it influences billions of people, around the globe. Tech organizations especially Mozilla, Microsoft, and Google play a huge role in examining the workings of the internet, finding bugs in browsers and transfer protocols such as TLS. They are always trying to hunt down security leaks before they get found by hackers, with not so notorious intents. 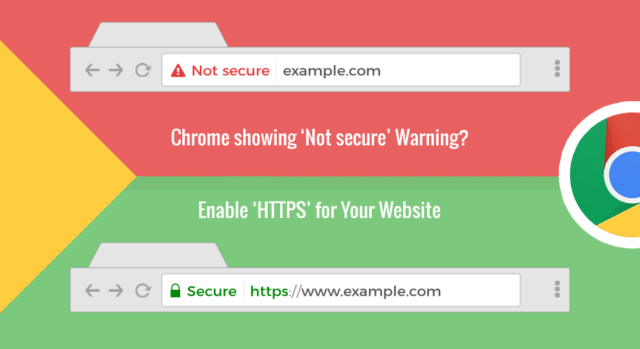 Google, being the guardian of the now immensely popular web browser, Google Chrome, has to lead this cause of internet security. HTTPs is secure and that’s why Google has been enforcing website owners, bloggers, publishers, media websites, etc., to serve their web pages on HTTPs. It has also given incentives at various points in its quest. For example, a while back Google publicly declared HTTPs as a search engine ranking factor. Meaning, if you got HTTPs on your site, there’s a good chance that it will rank higher than before.

At other times, it discouraged visitors to trust websites without HTTPs security by showing a “Not Secure” sign for non-HTTPs sites.

As of now, sites with HTTPS show a “Secure” sign on Chrome browser, quite contrary to the HTTP sites. Now according to a Chromium blog, with the release of Chrome 69, the Secure label over HTTPS sites will be removed. In addition to this, with the release of Chrome 70 in October, standard HTTP pages will be labeled with a “Not Secure” warning with a red triangle attached. In this way, Google is doing its best to turn HTTPs into the new default. No longer will HTTP be considered default as far as Google is concerned.