Call of Duty: Modern Warfare would be released on October 25, 2019. The game would be available for the three main platforms; Microsoft Windows, PS4 and Xbox One. This is the 16th game released in Call of Duty series.

The reason why many players love Call of Duty is because of the multiplayer experience they get. When a player goes to the battlefield, he is not alone there and that is what makes the whole experience, really fun.

In Call of Duty: Modern Warfare, players would get the chance to experience fast-paced action. The visuals in front of them would feel more realistic and they will enjoy the kill-streaks.

The new version of the game gives players more command over their own weapons, as they will be able to customize them.

The game has a single player option, which will focus on helping players make moral choices. Their score will reflect the choices that they make in the game. For example, when players see a situation, they have to find out right away if the person they are seeing is a threat or not.

If a woman seems like she is reaching for a gun, but she holds her baby instead, and the player still shoots her, then this will reflect on his score.

There is a collateral damage score in Call of Duty: Modern Warfare, and it will identify how well a player has been able to assess the threat. In the previous versions of the game, players were not able to reload their weapons and side by side aim the gun, but things have changed in this version. 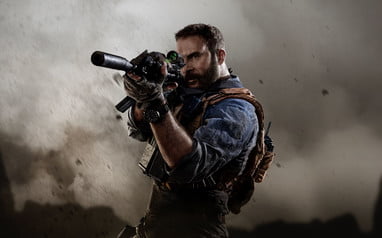 There are sixty types of weapons from which players can choose from, and they can have five weapons with them, at the same time. The character that is returning to the game, from the Modern Warfare games, is Captain Price.

Call of Duty: Modern Warfare is more about testing the tactics that players can apply to this game. The players would be given a map that they can use to explore the area, and the mini-map fro past games have been removed.

A compass style marker has been introduced for players, which will alert them about people who are friendly and those that are opponents.

In Call of Duty: Modern Warfare, a new feature has added called Ground War, which can take up to 100 players. Two players can play against each other as well, in the mode called Gunfight.